"You will see neither wind nor rain, yet this valley will be filled with water, and you, your cattle and your other animals will drink. This is an easy thing in the eyes of the Lord; he will also hand Moab over to you."
- 2 Kings 3:17-18

In 2 Kings 3, King Mesha of Moab was forced to give the king of Israel one hundred thousand lambs and one hundred thousand rams. He was not happy about it and rebelled. So King Joram of Israel, King Jehosphat of Judah, and the king of Edom joined together to fight Moab. Instead of traveling east and south and crossing over the Jordan River, they took a longer route south and then east through the desert of Edom. 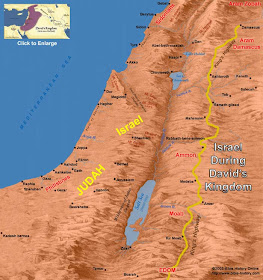 If you click on the map, you can see it larger. They traveled from Israel and Judah south through Edom toward Moab.

After seven days of travelling through the desert, the three kings and their armies had completely run out of water.
The king of Israel complained, "Bad news! God has gotten us three kings out here to dump us into the hand of Moab."

They were desolate, probably afraid, and would die of dehydration in the desert if God didn't miraculously intervene.

The King of Judah suggested that they consult a prophet of God. Normally, they didn't worship God - they worshiped idols - but they blamed God for leading them into this desperate situation. So they found Elisha and the three kings went to meet him.

Elisha revealed God's word to the kings: "Dig ditches all over this valley. Here's what will happen - you won't hear the wind, you won't see the rain, but this valley is going to fill up with water and your army and your animals will drink their fill. This is easy for God to do; he will also hand over Moab to you."

And so they dug. And in the morning, the water had arrived, pouring in from Edom and flooding the entire valley with water.

The Moabites stood at a distance, ready to attack. When they saw the water reflecting from their point of view, it looked like pools of blood.

"Blood! Look at the blood!" they said. "The kings must have fought each other - a bloody massacre! Go for the loot, Moab!" The Israelites were waiting to slaughter them when the Moabites charged to their death.

The part of this story that struck me was God's unique command: Dig ditches. God easily could have said, "Be still and know that I am God" as he had before, and sent rain. But this time, he wouldn't save them with a dramatic storm. In fact, they wouldn't even see the water coming. But if they obediently dug ditches, he would fill them and would save their armies with life-giving water. The three kings and their armies had to take the first step of faith and obedience, and God would do the rest.

For me and Shawn, we are on the brink of several major decisions, one of them being when to begin nursing school for me. We feel strongly that it's what God wants us to do, that someday on the mission field, he will use my knowledge as a nurse to help someone in need. But to anyone who sees our current financial situation, it's an unreasonable idea to pay thousands of dollars to go to school. A reasonable person might advise us to work a little longer and save a little more to prepare. But that's not what we feel God is asking us to do. He's asking us to take that first step of faith. What encourages me about this story is that to the same God who filled the Israelites' ditches with water and saved them from the Moabites, my situation is easy for him.

And so we dig.

I register for classes and plow ahead, expectant that the Lord will provide. I know without a doubt that we will look back months and years from now and see his provision when it looked like we were headed for a dead-end road. Maybe there won't be a sign of it beforehand - we won't win the lottery or become heirs to someone's fortune - but as we take steps of faith, he will provide. As we dig, he will fill our ditches with water.

What part of your life is God asking you to pick up a shovel and dig? What seems utterly impossible, but is something he has burdened you with?

I encourage you to remember this:

Jesus looked at them and said, "With man this is impossible, but not with God; all things are possible with God."
- Mark 10:27, NIV
*All things in quotes taken from 2 Kings 3, the Message.
Share