The next year: Our love story continued.

While I'm sure there is so much to recount from that year, so much of it was a blur. I was a senior at Moody, working on the Manna project, nannying part-time for a family nearby, and somehow getting homework done. We still saw each other every day, if only for a few minutes between our other commitments.

Within a couple weeks of dating, I knew he was it. I was going to marry this guy. I called up my dad - who happened to be traveling at the time - and said pretty bluntly, "I'm going to marry Shawn." He said, "Wow. I'm glad I was sitting down." I'd never said those words about anyone else before, because I'd never felt them. I told my dad that there were no red flags in our relationship, not even yellow flags that would make me hesitant about Shawn. So much peace surrounded our relationship and our passions for ministry, for missions, and our compatibility in so many other ways just confirmed that I was supposed to be with him. Forever. It didn't scare me one bit. I was ready.

So nearing our one year anniversary of dating, I was getting suspicious. Was he going to propose? I'm sure lots of girls go through this... getting needlessly worked up over every holiday or significant date (Christmas? Valentine's Day? My birthday?) and then trying not to seem disappointed when there was no ring. Our first year anniversary came and went. No ring.

At one point, Shawn and I even photographed an engagement from the bushes (my dear friend Anna had no idea we were there hiding), and the moment was so beautiful. But it also made me think, "When in the world is Shawn going to propose? Is he even thinking about it?"

I should've known he had been thinking about it. Planning for months. Saving every last penny from his catering job for the most incredible day of our lives.

One way he planned was by taking me ice skating often to "practice" (though I had no idea that was the reason, of course). I hadn't grown up skating and was pretty shaky on the ice. But Shawn knew if we were going to get engaged on ice with hundreds of people watching, I'd need some practice. I bought my own skates and we went skating quite a bit. It was fun, sometimes, and I was improving each time - but sometimes, I'd fall right on my knee caps multiple times and end up so bruised that I could barely walk without pain. Shawn was determined, though, and bought me knee pads to wear while I skated so I'd enjoy it more and not be scared to fall. 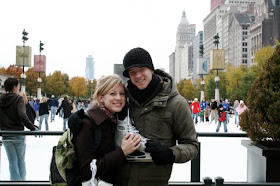 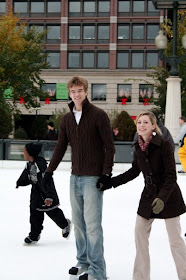 So in March 2008, the night before we got engaged in New York City, he took me ice skating in Millennium Park in Chicago. It was particularly crowded that night and the ice was really scuffed up so it made it a lot easier to fall. I fell a couple times when little kids whipped past me and made me lose my balance. Finally, I got so frustrated by it that I got off the ice and told Shawn, "I hate this. I'm never doing this again."

Shawn, feeling a little worried that the very next day, I wasn't allowed to hate this - said, "You just hate skating here, with so many people, with rough ice. You don't hate skating."

"No, you don't. It's part of our story, sweetie. We started liking each other on the ice in New York." And I'm sure he wanted to say, "And we're getting engaged there TOMORROW so you better like it!" But he just put his arm around me and we headed back to campus.

Way to kill the moment, Whit (and way to give your boyfriend a heart attack).

When we got back to campus and started to thaw out in the lobby of my dorm, Shawn handed me a card. It was beautifully handmade by him and had an invitation to a date the next day. I knew something was up - and had a feeling it may involve an engagement - but had no clue how incredible that day would be.

The next chapter of our love story is our engagement day. To read it, go here.
To see the many photos from the day, go here to see my Facebook album. You won't regret it. :)
Share