He who watches over you will not slumber. 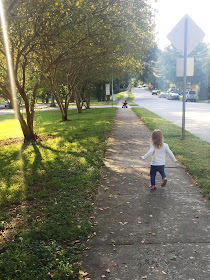 Yesterday, on a gorgeous, autumn-lit afternoon, Liam and Lanie and I took a walk to the park at the end of our street. Liam has become adept at stopping at cross streets on his tricycle and waiting for me, so I let him ride a few dozen feet ahead. I can still see him and talk to him, but he isn't within reach.

Just before we turned into the park, Lanie slipped on a crack in the sidewalk and scraped her knees. I saw Liam zip into the park on his bike, then I scooped Lanie up and rounded the corner into the park, expecting to see Liam.

About 50 feet ahead of me, in the middle of the sidewalk, I saw a tricycle. An empty tricycle. I picked up my pace and looked around. No sign of Liam anywhere.

"Liam?" I called, hoping I'd hear an immediate, "Yes, Mommy?" Instead, I was met with silence.

"LIIIIAAAAMMMM!" I screamed, a primal cry from a mom who had to find her boy. A man with his headphones on was walking past, but no one else was in sight. No one who could help me find my son. My heart beat behind my eyes as the world grew silent. I could barely take a breath.

I yelled one more time - a sound he would have to hear if he was anywhere close - and suddenly I heard giggles from the bushes. "Come get me, Mommy!" More giggles. I pulled down one branch and saw his smiling eyes. "I was jus' hiding from you!" Not funny, buddy. Not funny at all.

The episode stuck with me for the rest of the day (and hopefully with him, after some discipline). To have my heart walking outside my body, as someone has said of children, is one thing. To have my heart lost outside my body is another. The day could have turned out so differently. I took my eyes off of him for all of 10 seconds and suddenly he'd gone missing. Our neighborhood isn't exactly Pleasantville, so anything was possible.

Before bed last night, I opened my Bible to the Psalms. Liam and I have been memorizing Scripture together, and yesterday's verse was this one:

I wanted to read that verse in context, so I kept going.

I don't know about you, but sometimes when I read truths about God, they simply feel too good to be true. Too extravagant to actually believe. He never sleeps? Never turns his back from me, or from any of the goings-on of our broken world? My mind can't wrap itself around that one, but I take such solace in the piece of it I do grasp. I can try to hide in the bushes - and I have certainly tried - but I am never hidden from his ever-vigilant watch. My life - your life - is never forgotten, never turned away from.

I remember sitting in a summer class in college on the Psalms, and we were dissecting Psalm 37. Psalm 37:4 struck me because it was one of my favorite verses during my high school years:

Delight yourself in the Lord, and he will give you the desires of your heart.

I'd heard a pastor once explain that if we delight ourselves in the Lord, he will create desires in our hearts that align with his will, and then he will fulfill those desires that he's placed in us. Makes sense, doesn't it? I spouted off that information to the class.

I'll never forget my professor's response. He said, "What if God, by his grace, gave us what we desired because he loves us? Sure, he always gives us desires that align with his will, but I don't believe that's the point of this verse. I think that view of God is too limited, too safe."

What I had believed of God had been true, but my view of him was too small. Too stingy. Too much like a business transaction: I delight myself in him, he places desires in me and then fulfills them. My view didn't account for the lavishness with which he loves me, as his child. The word "desires" can also be translated "petitions." Petitions have a deeper meaning than just a petty request. They are the deepest, prayerful yearnings of the heart.

As John Calvin wrote about this verse, "We must therefore constantly recall to our minds this truth, that it can never be well with us except in so far as God is gracious to us, so that the joy we derive from his paternal favor towards us may surpass all the pleasures of the world. To this injunction a promise is added, that, if we are satisfied in the enjoyment of God alone, he will liberally bestow upon us all that we shall desire: He will give thee the desires of thy heart. This does not imply that the godly immediately obtain whatever their fancy may suggest to them; nor would it be for their profit that God should grant them all their vain desires. The meaning simply is, that if we stay our minds wholly upon God, instead of allowing our imaginations like others to roam after idle and frivolous fancies, all other things will be bestowed upon us in due season." (John Calvin's Commentary on the Psalms)

In two days, I would have been due with the baby we lost in March. September 30th has been looming large in my mind for months, and I've hoped that I would be pregnant again by now to lessen the sting of this day. It's never taken long for us to get pregnant with any of our four pregnancies, but for whatever reason, this time it's taking longer. Perhaps another pregnancy isn't what he has for us. Maybe it's adoption. Maybe it's just waiting a while longer. But I have to tell you, I believe more than ever in a vigilant God who never slumbers nor sleeps. An omniscient God who is intimately aware of the comings and goings of my life. A gracious Father God who knows the desires of his daughter's heart and loves to lavishly bestow them. He knows we desire another baby, and we trust that in time, he may fulfill that desire. In the meantime, we pray for grace to trust him more.
Share