"Blessed is the man who walks not in the counsel of the wicked, nor stands in the way of sinners, nor sits in the seat of scoffers; but his delight is in the law of the Lord, and on his law he meditates day and night. He is like a tree planted by streams of water that yields its fruit in its season, and its leaf does not wither. In all that the does, he prospers." Psalm 1:1-3 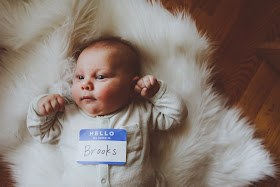 Never in a million years would we have planned to change our baby's name at almost two months old. Names have always been incredibly important to me - I rarely forget them - and we'd been searching for months for the perfect one to fit our little guy. He arrived 2 weeks early and we'd been circling over a few, but hadn't landed yet. But because you can't leave the hospital without a name on paper, we chose two names from our list: Ellis Lincoln. Though we loved (and still love) both, they just didn't fit him or our family for various reasons. It felt awkward calling him either one, like a suit that just didn't quite fit. This was a conundrum we never experienced with our first two, so we began to contemplate changing his name completely. (Side note: Not to worry, he hasn't been completely nameless. He does have plenty of unofficial names, Brother Bear being my favorite.)

I've scoured hundreds of lists of names for the past 8 weeks and become quite a student of nomenclature. I've learned that Kennedy has a lovely sound but means "misshapen head," and that Oliver ranks #12 in the US but tops the charts in a few other countries. I've entertained names as classic as James and as unique as Falcon (though not for long).

After weeks of searching and praying and hitting walls and losing sleep over which name might fit him, Shawn and I prayed that God would reveal his name in a dream, if that's what it took. It was not a conventional prayer, as I'm not sure He's ever really spoken to me in that way. It was a prayer out of desperation, a last resort - and honestly, not something I expected to happen.

A few weeks ago, it did.

I drifted back to sleep after a 4:00am feeding and into my dreams popped a smiling, confident little boy with blond hair and a striped shirt. He said, "My name is Brookland, B-R-O-O-K-L-A-N-D, but everyone calls me Brooks." I woke up slightly startled and searched for Brookland, a name I'd never heard, on all my bookmarked naming websites. I couldn't find any information other than a loose translation: "peaceful place." It struck me immediately because anyone who's held him to their chest has sighed, "Oh, he's just so peaceful." Brooks is a beloved family name we'd been considering, and the name I would have been given had I been a boy. I probably would've thought he was saying Brooklyn in the dream expect that he spelled it out.

A brook is a stream of water, and the passage that kept coming to me from Scripture was Psalm 1:1-3. It is such a fitting prayer for his life. A couple weeks after the dream, a friend who knew nothing of our quandary sent us a baby gift addressed to "Ellis Lincoln." When we opened it, we were stunned to see a beautiful painting of a brook surrounded by trees with the passage from Psalm 1:1-3 written out.

We just can't shake the feeling that this boy is our Brooks. Our peaceful place. We pray his life - in Christ - brings peace and order into this chaotic, confusing world just as he has already begun to do in his few short weeks on the planet.