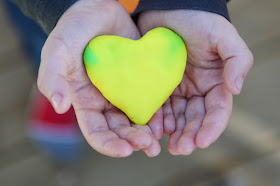 It's an unspoken house rule that we don't mix play dough colors. My kids don't get in trouble if they do, it's just that the type-A side of me would rather have clean colors to work with instead of a mashed up brown blob of dough. Liam agrees. So when I saw him take a tiny piece of green play dough and try to mix it into the yellow, I was surprised and looked on.

His tiny fingers kneaded and pushed and smashed the dough, slowly at first and then furiously. I watched disappointment cloud his eyes when he realized that the green wasn't mixing in. It wasn't going away. He brought the marbled yellow dough to me and said, "Mama, I want it to just be yellow again. I have an idea! What about we add yellow food coloring?"

But I could read his determined face: he had to try this for himself. I reluctantly pulled out a bowl, the yellow food coloring, a spoon, and his yellow-green wad of play dough. I watched as he mixed with gritted teeth and still saw flecks of green.

"Hey buddy, you know how we talk about sin and that only Jesus can forgive us and make us completely clean?"

"Yeah," he whispered as he continued to knead the dough.

"Look at this perfect yellow play dough. There's a little green in there now... let's act like the green is sin. Maybe you told me a lie, or maybe I talked angrily toward you. A lot of times, instead of running straight to Jesus to ask forgiveness and make us clean again, we try to cover it up. We mash it in and try to hide it. And does that work?"

"And sometimes, we try to make it better by our good works, like adding more yellow. I might be extra nice to you after I've been in a sour mood, or you might do a super helpful thing because you feel bad about lying. And does that make the play dough yellow again? Does that clean up our sin?"

"Here's the thing. Jesus loves us so much that He isn't ok to let us stay in our sin. He doesn't want our hearts looking like muddy play dough. When we ask for His forgiveness, He forgives us and gives us a brand new start: a perfectly yellow piece of play dough. We will mess it up over and over and He will clean up our mess again and again.

"Buddy, I don't ever expect you to keep your play dough - or your heart - completely clean. God's Word tells us that all of us sin and fall short of God's glory. I actually expect you to mess up, to fall down, to make mistakes, to sin. But what I hope is that you'll run to Jesus in repentance. That you'll confess your sin to him and ask for a clean heart. Only He can give you that."

I realized I'd just done a lot of talking, a lot of preaching to myself. That God is so graciously, persistently, faithfully parenting me as I parent my little loves.

After a long silence, Liam's fingers stopped working the dough and he looked up and asked, "So He gives us a new play dough heart, Mama?"

The other day, I had a low moment in the drive thru line at Chick-fil-A. I was running on fumes. I'd had just a few hours of interrupted sleep after a difficult night with Brooks, and my kids were begging for ice cream cones, not cups, that they expected me to hold while driving for the 20-minute trip home. On top of it, my order was wrong. So there I sat, holding up the drive thru line with three crying children in the backseat and my head about to explode. In an effort to appease them, I tossed Lanie's kid's meal toward her carseat where it landed short and tumbled out of her reach, spilling fries all over the floorboard. More crying ensued.

I was not ok. I grumbled to myself, "If I could only have more sleep, I'd be able to cope with this."
"If we only had grandparents in town, I'd get a little break."
"What I need is more help, more money, more rest."

And like a heavy brick that thrust me back in the driver's seat of my minivan, I heard Truth: "What you need is a new heart."

Last week, my uncle went to heaven. Uncle Jeffrey was born with a myriad of birth defects and was severely handicapped throughout his life, both physically and mentally. His body was disfigured to the point that his heart was housed on the right side of his chest. He defied many odds in his 55 years, but his limitations were very real.

My mom and uncle flew in and we traveled to his funeral, not knowing who or how many would show up. Because of his severe disabilities, Jeffrey couldn't give back much - and he didn't know anyone outside the walls of his group home.

After arriving at the funeral home, a handful of family members congregated near his casket, talking quietly of his humble accomplishments. A few minutes later, the most beautiful, unexpected thing happened. The back doors of the funeral home swung open and six of Jeffrey's housemates were wheeled in by smiling caregivers, like a royal procession of stately men coming to honor their fallen comrade. These were the guests of honor, dressed in their finest, wheeled in to sit for a moment near the casket of their friend.

Meanwhile, more guests trickled in. Jeffrey's doctors, his nurses, his caregivers who had known him for more than 20 years. An onlooker never would have known of Jeffrey's disabilities when they saw a room packed with people who beamed when they talked about him. You'd think he'd been their best friend, the way they spoke of his quirks, his stubbornness, how cute he looked in the photos that flashed across the slideshow. Accomplishments like seeing and hearing and taking a few steps were celebrated as if he'd earned an Olympic medal.

As I looked around at this upside down kingdom, the tears welled up. The able-bodied and able-minded were celebrating those who were not. The lowest of this earth were being lifted high. What should have been a day tinged with mourning felt so unexpectedly hope-filled.

Ultimately, each one of us celebrated the wholeness that Uncle Jeffrey now experiences. He was given new arms, free from contractures; new legs, unhindered by cerebral palsy. He received a new mind, without the limits he'd always struggled against. Jeffrey even got a new heart, one that didn't beat on the wrong side of his chest. A heart that, even this minute, hears and sees and beholds Jesus in a way I can't even fathom.

And he who sat upon the throne said, "Behold, I make all things new." - Revelation 21:5

This newness, this wholeness, this unwavering hope is not just a promise for Jeffrey who has now experienced the ultimate healing. He has what we, as believers, crave: a new heart, a new spirit - one that is unable to sin because it has been perfected in the presence of God.

So there is a bridge that links the new heart that Jeffrey is experiencing in its fullness to the new heart I can experience in the drive thru line at Chick-fil-A. It's this same God - Redeemer, Restorer, Healer of Hearts - who is there in heaven and is here with us now. When we look to Jesus in our desperation and beg of Him, "Lord, create in me a new heart," it's a prayer He loves to answer. This same God who replaced our hearts of stone with hearts of flesh when we first believed is delighted to create in us new hearts and right spirits within us (Psalm 51:10) when we ask.

Isn't this incredible news, friends? It is for me... in the frustrating moments with my kids, in the midnight hours of exhaustion with a new baby, in the hospital with difficult patients. I hope it is for you, too, wherever life finds you.
10 comments:
Share
‹
›
Home
View web version